This is my July 12 in '12 collage. As I wrote here, for the remainder of the year I am journaling each month in picture. This picture is loaded with signficant and meaningful stuff irrespective of how insignificant it looks.

1. St. Francis of Assisi is one of the great mentors in my life. I read something in late June that sparked a desire to re-read some of the things I've read on this great man. I wanted to rekindle some of the truths that I learned from him. In July I re-read these books.

2 and 11. These pictures are from Deborah's 13th birthday. I officially have 3 teenage daughters.

3. Hannah found this kitten near 7-11. It was meowing and she looked down at her feet to discover him there. She brought him home and nursed him back to health. This picture was taken after we had him over a week. He was tiny and had already filled out by the time this picture was taken. It is pitiful that something so small was all alone in the world. Hannah named him Haze and was diligent caring for him. He temporarily softened her heart and since we were desperate for Hannah's heart to be softened, it was a no-brainer that we keep him. He was much work though -- I think he was blind and he meowed nearly constantly. Hannah soon tired of the job and I took him to the Humane Society where I figure he found a good home. But for the short time he was with us, he touched us with his helplessness and his ability to soften a young girl's heart.

4. In June I went to a seminar and heard the benefits of giving up grain products. I checked some Paleo lifestyle books out at the library and on July 1 started eating the way a Paleo enthusiast would. It has now been 36 days of having no junk food, no fake food and no wheat products. Bonus, I lost several pounds in July.

5. This picture of Hannah was taken a few days before going into PChAD. In this picture, although it's a fine picture, the subtleties of her expression reveal her hardness of heart.

6. I love summer and I love my little container vegetable garden.

7. While in PChAD, Hannah resumed her former love for painting. She painted four pieces while there. It blessed my socks off to see her embracing a former love. It's probably been a year since we've seen this side of her.

8. Deborah has had nearly two good months of not cutting. However in July she had a huge upset and she cut again. I'll be sharing some big news on that front very soon.

10. This is the Alberta Alcohol and Drug Abuse Commission (AADAC) sign that hung outside of Hannah's safe house for the PChAD program.

12. This isn't just a silly vain picture of my hand. There's some significance here. When Hannah's behaviour started getting erratic and volatile, I read her diaries to try to determine the extent of her drug problem. One thing I read in her diary was how she hates her fingernails and wished they were prettier. I realized that was something I could help her with. I have never tended to my nails with affection, but when I read that I decided I'd begin to stock our home with nail supplies and offer to keep her nails manicured. And I have. As a byproduct of this commitment, my own nails have gotten lots of babying too. This is the first time I've ever worn red fingernail polish. I feel eccentric.

(Grandpa and the girls)

Eight years ago today my father-in-law passed away. He was 67. It was a hard time for our family, but I have some sweet memories from that time that I cherish.

We told the kids that Grandpa was very ill and that he would get to go to heaven soon. Deborah was nearly three. Rachael was nearly seven, Hannah was nearly six. Each of them processed it very differently. Rachael acted like it was no big deal, but that's a regular coping mechanism of hers. We knew it was big to her.

Hannah was astute and forthright. During prayer time at church on the Sunday before he died, Hannah's voice rang out clearly as she asked for prayer. "My grandpa in very sick and he hurts really badly right here," she said as she pointed to her side. (He had liver cancer.)

I thought Deborah was too young to process it one way or the other. I was wrong. One day I was in the garden and I overheard her talking to herself in the tree-house. "Grandpa is very sick and he's going to heaven soon." She said it several different ways, several different times. At that point I knew she was agitated too.

The call came that he'd passed away and we went to his house. We gathered around his bed and his kids and wife told stories, we prayed and sang a few hymns. We learned that one of Eric's favorite hymns was "Morning has broken, blackbird has spoken...." We sang it.

When we cleared out of the room for the funeral home to come, Hannah asked if she could see him once more. She and I went back into his room alone. She held his hands and thanked him for being a good grandpa. She told him she looked forward to seeing him again in heaven and then she kissed him.

After the funeral home had his body on the gurney, the sons and son-in-law carried him to the waiting car. We all stood in the yard, solemnly watching them drive away. As soon as the car turned out of sight, 2-year-old Deborah jumped up excitedly and said, "Yaaay! Grandpa's in heaven." In Deborah's mind, when he got out of sight, that's when he entered heaven.

Over the next day or two, even Rachael revealed her heart. We had learned that "Morning has broken, blackbird has spoken..." was a favorite hymn of his. Rachael drew her therapy. It's a card. The front page is a blackbird in a limb.

Inside the card, there is Grandpa on his bed and Beppe phoning us to tell us he had just died. May always wore a bun back in those days. See her bun?

These memories and this card are precious to me. 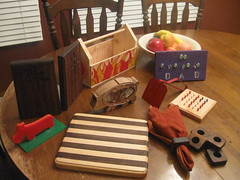 industrial arts
Originally uploaded by valeriedykstra
These are some gifts Gordon and I have received over the past year or so from the girls. They were made in Industrial Arts' class. They are pretty special to us.

Click on the picture and you'll be able to see a description of the items.

in which i brag on hannah's art

I sure wish I could take some credit for some of this artistic talent, but I can't.

But she's fun too, and I can take credit for that gene.

These are a couple of Rachael's sketchings. I think she's getting so good. I love her drawings.

And this last one is just something that makes me smile. Smile with me.

What started in 2005 as a place for a young-ish mom to brag about and chronical family life is now where a middle-aged woman still chronicles family life, but records her spiritual journey too. In 2015, I converted to Catholicism. On this journey, I've fallen more in love with Jesus than I ever thought possible. I want to share the joy He has given me through the Holy Catholic Church. This blog still chronicles my ever-growing family, but it's also about my spiritual walk. I am in love with Jesus. I am Catholic to the max, a wife, mother to five, Beppie to lots, a pray-er, family historian, lover of laughter, story teller, and I'm blessed beyond belief. I hope your visit here leaves you wanting more of Jesus. Note: If I have written anything contrary to the teachings of the Catholic Church, it was done in ignorance. I am 100% submitted to the official teachings of the Church.